on November 13, 2014
It is not a subject that I know much about - but I do have some stories to share.  I am not aware that I have ever met a prostitute - even though I have visited a brothel, which I will shortly explain.

It is something that in my experience women do not discuss. I would think from memory, any mention of prostitution would result in words of disdain about the men and women who "indulge" in this industry.  I know many women feel that prostitutes reduce rape - if a man is so desperate for sex he can go and pay for it rather than attack and rape a vulnerable woman.  Women certainly don't sanction their husbands using the services of a prostitute - though of course we can guess that many husbands do and the wife/partner would never know.

I think there is an unspoken almost support of those women who choose prostitution out of financial desperation, though wish there was some other way of gaining financial and other support.  I have read of women paying their way through university with  their income from prostitution, but in the end, for the most part it is illegal in Australia.

It was legal and very much controlled in some mining towns in Kalgoorlie for many years and I had the privilege of visiting one of the famous brothels in 2013.  It is a  working brothel and a tourist attraction.  I know, sounds weird.  Anyway, when I discovered the advertisement for it in the tourist brochure when I was there, I visited.  The Madam was most interesting - she had certainly not been a prostitute, and ran a good clean safe operation for the girls, despite the fact that the strict laws that governed the industry were no longer.  It was fascinating.

Why am I posting this today?  In part because I read an article about how Sweden has changed its attitude and laws regarding prostitution.  It was this article - actually on Facebook that interested me.  Women are exploited in many countries - for sex, and much of it is legal e.g. procuring young girls for marriage (sex) in many countries of the world.  Men have a strange belief that they have a right to sex whenever they want it.  Having many wives helps to satisfy their sexual appetite but does nothing for the value of women.

Wikipedia says "The laws on prostitution in Sweden make it illegal to buy sexual services, but not to sell them. Pimping, procuring and operating a brothel is also illegal.  The criminalisation of the purchase, but not selling, of sex was unique when first enacted in 1999, but since then Norway and Iceland have adopted similar legislation, both in 2009, and France began enacting a similar law in 2013"

Prostitution is governed by a number of state and federal laws in Australia - we have legal brothels and of course many illegal ones and there is a fair amount of traffic of young women being brought to Australia to do sex work.  Asian prostitutes are apparently very popular with the men.

The strict and somewhat draconian laws that governed prostitution in Kalgoorlie are no longer, and while some of the brothels, like the one I visited, are ruled by strict madams, much of the prostitution is carried out by young women from third world countries who are enticed here on promises of riches.

The issue of Sexually Transmitted Infections came to the fore a few years ago with the worldwide spread of HIV-AIDS which is still a problem, though much more manageable now with new medications and treatments.

For many women it is the fear of contracting HIV-AIDS from a husband or partner that has other partners.  The statistics in Australia are alarming to women.  It was reported in the Sydney Morning Herald in 2011 that 60,000 men used the services of prostitutes each week.  I don't know what the figures are for all of Australia, but those figures alone are alarming.  We can only guess that many of those 60,000 are probably married men.

The most recent data for Australia is here.   "An estimated 26,800 people in Australia live with HIV, the majority of whom are men."

So why does not Australia adopt similar laws to Sweden and the other countries that have followed suit?  Perhaps women need to lobby politicians more.  Perhaps because the majority of our law makers are men, some of whom may use the services of brothels, we will not get change in a hurry.

Women need to be more vocal to protect those women who are lured into this industry. 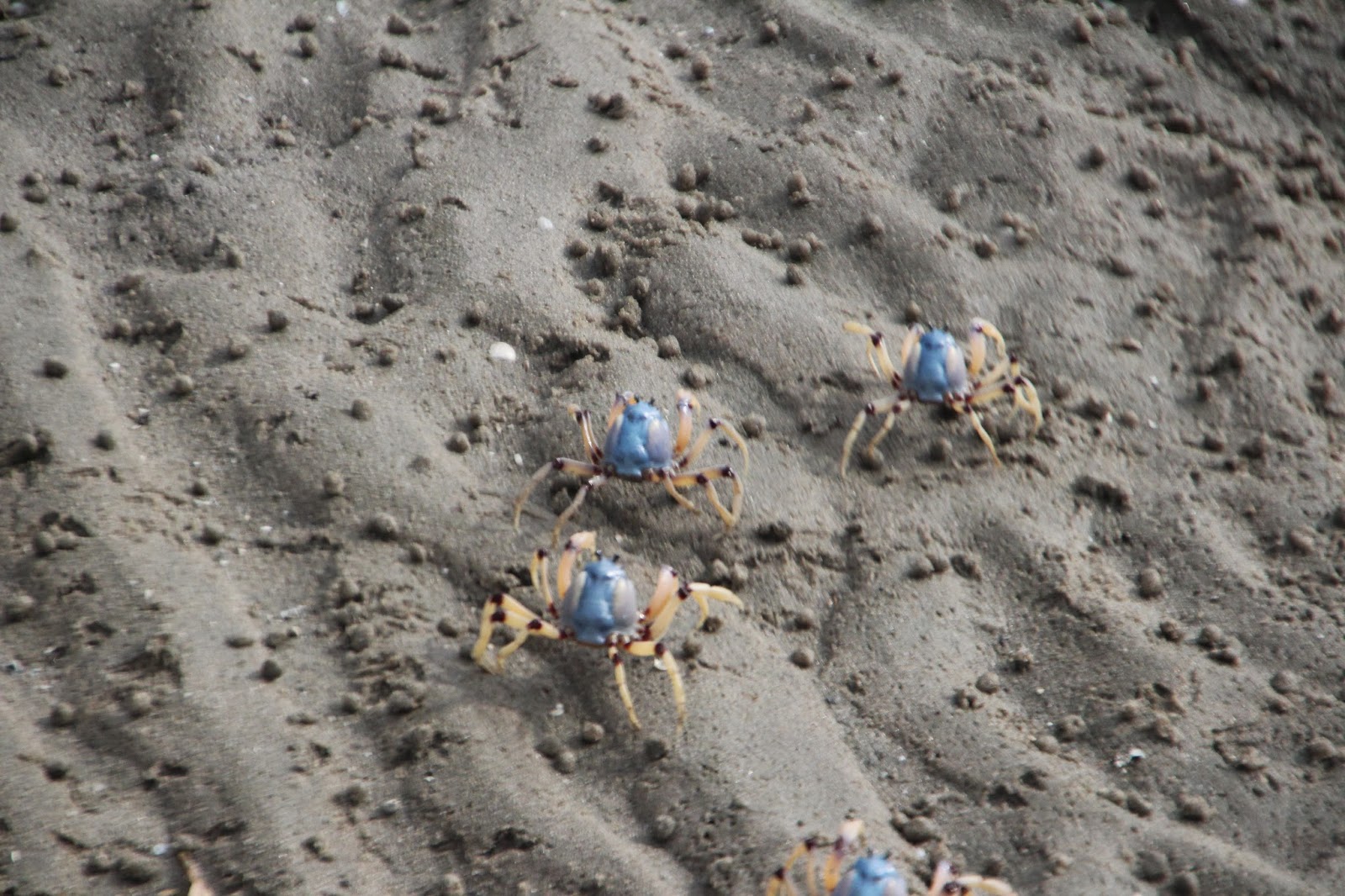 Beachmere?  Where is it?  I hear that so often when I mention that I live at Beachmere - so many folk haven't even heard of it, and fewer have been here.  I remember looking at the map and trying to decide if it would fulfil my desire to live within 100 kms of Brisbane, and near the sea.  When I "found" Beachmere I was thrilled and after my drive around Australia, I set out to find suitable accommodation for me - so here I am. It is not a swimming beach - in fact (unless you are lucky enough to have your own pool) you have to go to Bribie or Caboolture to find a swimming pool, but there are other bonuses!!!  It is tidal of course, and when it is low tide you will see many Beachmere residents taking a walk out along the sand flats.  There are many spots between the Caboolture River and the northern end of Beachmere - so that one can walk in a different area every day, and because of the tides, there are many changes on the sand. Different patterns in the sand, some 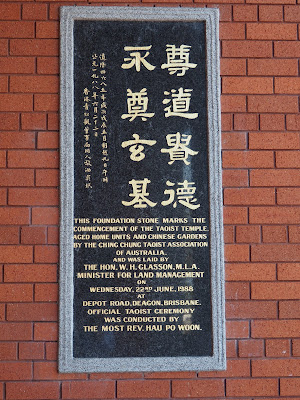 I wonder if many folk in Brisbane remember the Taoist Temple at the northern Brisbane suburb of Deagon?  The complex opened in 1988, and on the property was a wonderful temple, gardens and aged home units. There were two restaurants on the site - a two storied building a short distance from the temple which proved to be a very popular Chinese restaurant and functio centre, and, within the temple building, a vegetarian restaurant.  I frequented the latter often - not that I was a vegetrian but I loved the food that was there - it was somewhat of a discovery fo vegetarian food for me. Many years have passed since my last visit there.  In part because I no longer lived on the north side of Brisbane, and it was not longer a "local" venue. These days I often pass on the motorway, which is adjacent to the temple and the other buildings, and often promise myself that I will go back there one day soon.  This week the opportunity came to me and I drove in. 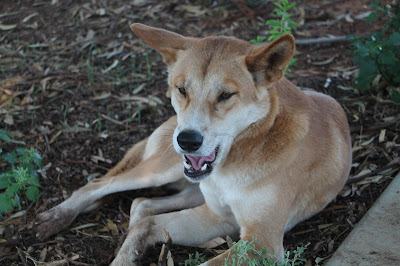 I first met Phil Thurn on the beachfront at Port Denison two years ago - when he was taking two of his dingoes for a walk along the waterfront, and we stopped and chatted with him and looked on a little warily of the two animals he was walking.  It was a brief chat, but today I went to visit Phil and the dingoes at his property on the Brand Highway at Dongara. One does have to make an appointment to see them, and we did, arriving a few minutes early to find no one at home.  Minutes later he arrived though, with one of the dogs back from the morning beach walk.  We'd rung the door bell on his home/office and I could hear the howl of a dog, and wasn't sure if the ringtone on the door bell was fashioned to sound like a dingo howling, or that there was one in or near the house that had heard the door bell.  We were to learn that it IS the ringtone of the door bell.  Clever. Kal - is he smiling? A good place on a hot day for Kal Kal - bothered by strangers in her